All You Need To Know About This Summer's Total Solar Eclipse

A total solar eclipse is happening across America for the first time in 3 decades!

Have you heard the news? An eclipse is coming! And not just any eclipse, mind you. A total solar eclipse! And for the first time in three decades, it’s going to happen right here in the United States!

First, let's find out how eclipses work. The Moon, our nearest neighbor in space, orbits Earth once every 27.3 days. At the same time, Earth orbits the Sun, taking just over 365 days to complete one revolution. The combined motions mean that about once every four weeks, the Moon and Sun line up almost exactly in our sky. We call that point “New Moon.”

They usually don’t line up perfectly, however. More often than not, the Moon appears a little bit above or a little bit below the Sun.

But every now and then, on average twice a year, they do line up at New Moon. When that happens, the Moon appears to slip across the face of the Sun, creating a solar eclipse. 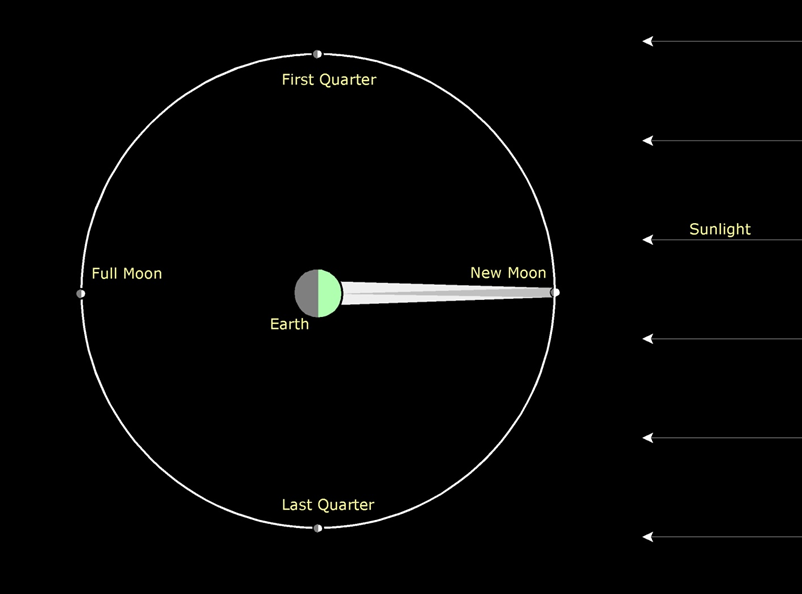 But, location is everything. This August 21, they line up exactly, and they do so right over the United States. The Moon’s shadow will be cast down upon the land.

If you happen to find yourself in that shadow, a portion of the Sun will appear covered by the Moon. Just how much of the Sun will be hidden depends on where you are in the shadow. If you happen to be in the exact center of the Moon’s shadow, for a brief moment, the Moon will fully cover the Sun. That moment is called a total solar eclipse.

But why all the excitement? Magic happens at the instant of a total eclipse of the Sun. The world around you changes. The sky turns an especially deep blue, while the horizon takes on an eerie yellow-amber-indigo-gray hue, almost like a 360° sunset. Overhead, bright stars appear midday. Pause and feel the wind. The wind seems to pick up during the partial phases leading up to totality, only to quiet to a dead calm immediately before and during the main event. Animals think that night is coming and go to roost, while the temperature may drop as much as 15°.

Meanwhile, the Sun has disappeared! In its place, we see a black disk surrounded by a glowing halo of pearly white light. The halo is called the corona, the Sun’s thin atmosphere. The corona is only visible during the fleeting moments of a total solar eclipse. With binoculars, it can be seen to extend maybe twice as far as the Sun’s diameter. 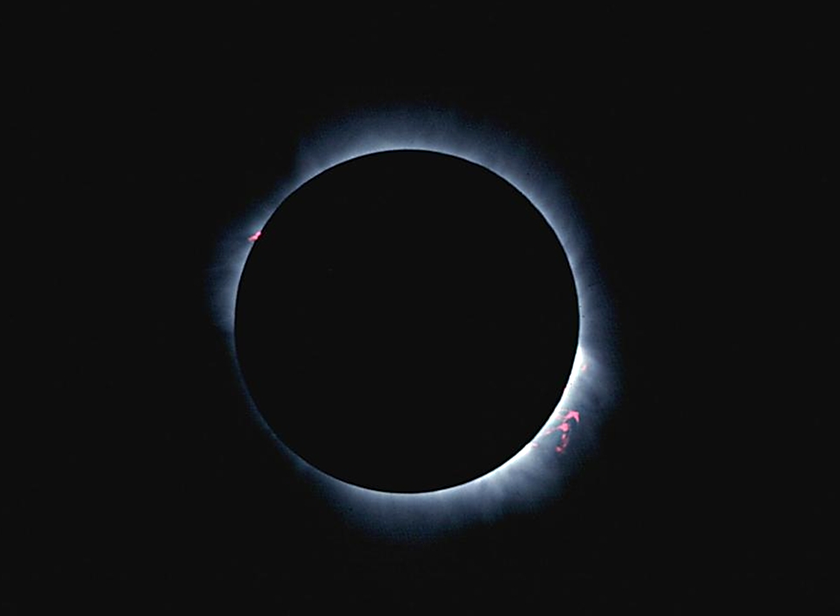 A total solar eclipse has not touched the continental U.S. since February 1979. This August 21, nearly four decades later, the greatest celestial show on Earth will finally return. While the entire country will experience a partial eclipse to some degree that Monday, the closer you are to the central track of the eclipse, the greater the coverage will be. And if you are lucky enough to be on the track, then sometime that day, the Moon’s central shadow will pass directly over you!

Totality is fleeting, no more than 2 minutes and 40 seconds long for this eclipse. It pays to travel to as close to the center of the eclipse path as possible to maximize that time.
The path of totality will span our country from the state of Washington to South Carolina. Along the way, it will pass over or near many major cities. Over 12 million people live along the path, with another 25 million within a day’s drive. That makes this the most densely populated eclipse in human history!

Always remember — Safety First!
The Sun holds the dubious distinction of being the only celestial object that may actually harm someone who looks at it. What makes looking at the Sun so dangerous? Not only does the Sun shine in visible light, it also emits intense infrared (IR) and ultraviolet (UV) radiation. Just as ultraviolet radiation causes sunburn after you've been outdoors for an extended period, it also will damage your eyes' retinas ... and at a much faster rate. The human eye only needs be exposed to direct sunlight for a few seconds before permanent eye damage, and even blindness, results.

Rule #1: Never use sunglasses to look at the Sun! They offer no protection.

The only time it is safe to view the Sun directly is during the few fleeting minutes of totality. At all other times, during the partial phases of the eclipse or on any sunny day, we must take precautions. Fortunately, that’s easy to do. And it is also a fun project for kids and parents to do together in the days before the eclipse.

The safest way to view the Sun is to make a pinhole projector using two pieces of cardboard. Punch a small hole, about the diameter of a pencil, in one of the pieces, and glue or tape a piece of white paper on the other. That’s all there is to it! Now, by holding the pieces toward the sky so that sunlight shines through the hole, a tiny image of the Sun will appear on the paper. Although the small image is not as sharp as if it were projected through a telescope, it should be satisfactory for viewing partial phases. 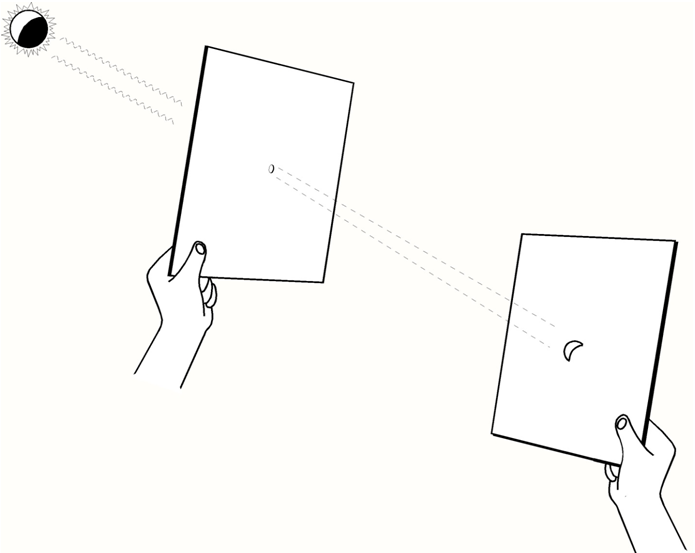 Plan your family vacation to see the total eclipse if at all possible. Here’s a map showing the path across the country. If you find yourself along the path of totality, you and your children will witness first-hand Mother Nature’s great show of all.

But beware! Some experts are predicting that August 21 will be one of the worst traffic days in national history. 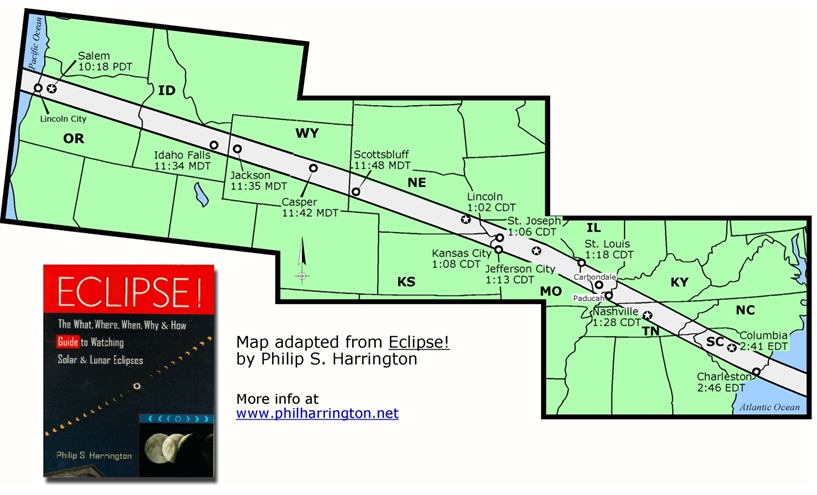 Even if you can’t travel to see totality this time, be sure to enjoy the partial eclipse right from your backyard! Everyone in the continental U.S. will see the Sun partially eclipsed by the Moon on August 21! Just remember to practice safe Sun viewing by using a pinhole projector.

Fortunately, we do not have to wait another 30 years for the next total eclipse. On April 8, 2024, the Moon’s shadow will again cross the U.S., this time from southwest to northeast.

But why wait? This August, bask in the Moon’s shadow and create a memory that you and your family will share for a lifetime.

About the Author: Phil Harrington writes the monthly Binocular Universe column in Astronomy magazine and is the author of nine books on astronomy, including Eclipse! and Astronomy for all Ages. He is also an astronomy professor at Suffolk County Community College on Long Island, NY. Visit his website www.philharrington.net to learn more.