C.J. Matthews started Blankies 4 My Buddies to give blankets to those in need

C.J. Matthews came up with the idea for Blankies 4 My Buddies to honor the memory of his sister, Karsen, after his mother experienced a pregnancy loss.

"For my son, who felt the loss of his sister so sharply, Blankies 4 My Buddies has been a way to redirect feelings of helplessness and hopelessness into pride because he believes that his sister is watching over him in approval and gratitude," Kristen Wright-Matthews, the publisher of Macaroni Kid College Park-East Point-Morrow, Ga., wrote for Macaroni Kid in a story about pregnancy loss in 2018.

C.J.,13, was featured along with his mother, Kristen, and little brother, Kollin, on CBS Evening News Tuesday, December 1, for his work with Blankies 4 My Buddies. Watch the whole segment here:

C.J. was also featured on ABC's Good Morning America. The segment was shown on the Jumbotron in Times Square — a thrill for the 13-year-old! 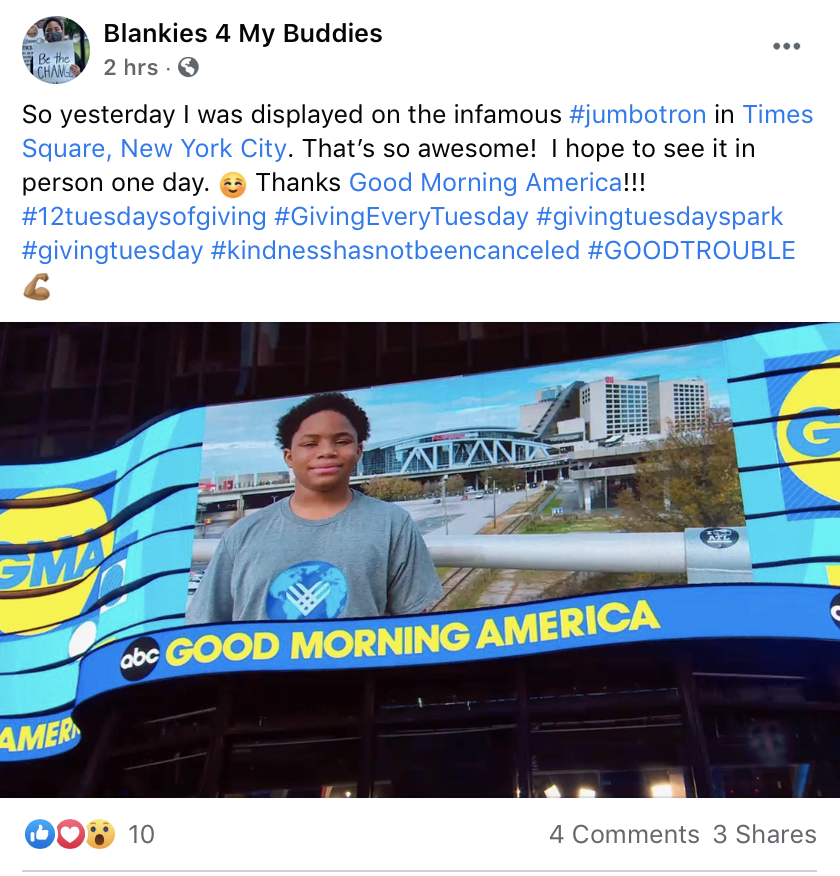 "I give because right now the world needs kindness more than ever," he said during the Good Morning America feature. "Everything has been canceled. But kindness hasn't been canceled."

C.J. typically hosts a Giving Bowl every December to raise donations for Blankies 4 My Buddies. While the Giving Bowl had to be canceled this year, C.J. and his family forged on. They organized a drive-thru blanket donation event where nearly 150 blankets were donated and enough cash donations came in to buy almost 1,000 more.

In addition, they distributed 500 boxes of food in their community, including milk, eggs, meat, and fresh produce provided by Feeding GA Families. C.J. also created comfort bags for children in shelters for Giving Tuesday.

This isn't the first time C.J.'s work has been recognized. He was also named one of 12 student ambassadors for the global movement Giving Tuesday's new initiative called Giving Tuesday Kids in 2019, an accomplishment featured in Macaroni Kid.

Want to help? You can donate to Blankies 4 My Buddies here.