Did You Know? 5 Fun Colorado-Themed Things for Kids to Learn this Week

Because of our majestic snow-capped mountains, you could probably infer that skiing and snowboarding are Colorado's official state winter sports, but what about athletics during the other half of the year?

Pack Burro Racing, Colorado's official summer sport, is an athletic event where participants run alongside a donkey loaded with official prospector paraphernalia — including a pick, shovel, and gold pan. It's a REAL sport, and it's one of endurance and patience as burros are known to be quite stubborn.

Colorado also has an official state amphibian (Western Tiger Salamander), state dance (Folk/Square Dance), and gemstone (Aquamarine), but unlike other states, Colorado does not have an official state fruit. A Palisade peach would be my pick for that category!

Visit colorado.gov to learn more about each of Colorado's symbols and emblems. Then continue reading below to discover five more Colorado-themed things to teach your kids this week.

I'm inclined to agree that this mountain joke is peak quality. 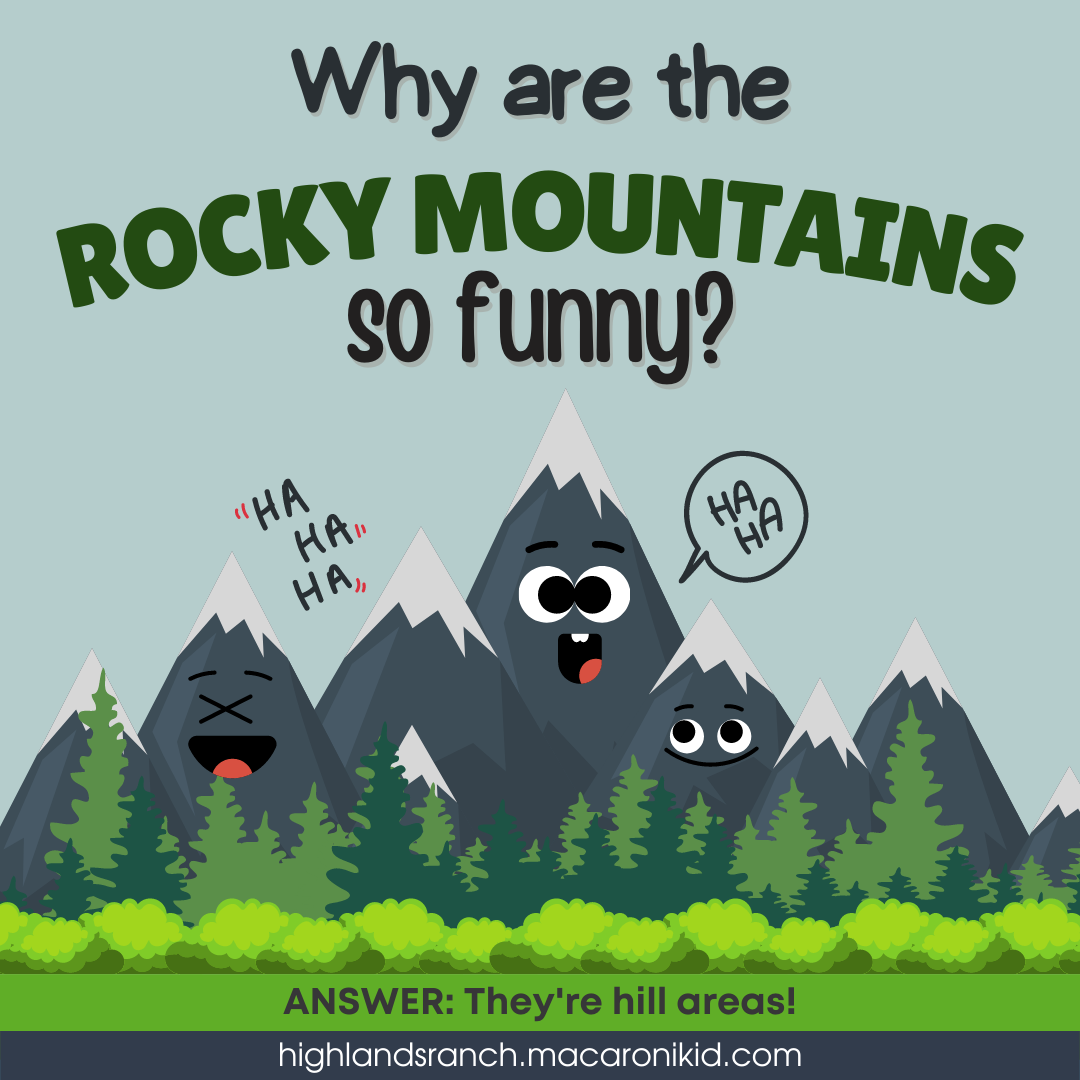 Why are the Rocky Mountains so funny? They're hill areas!

Have you ever wondered about where states get their names and nicknames? 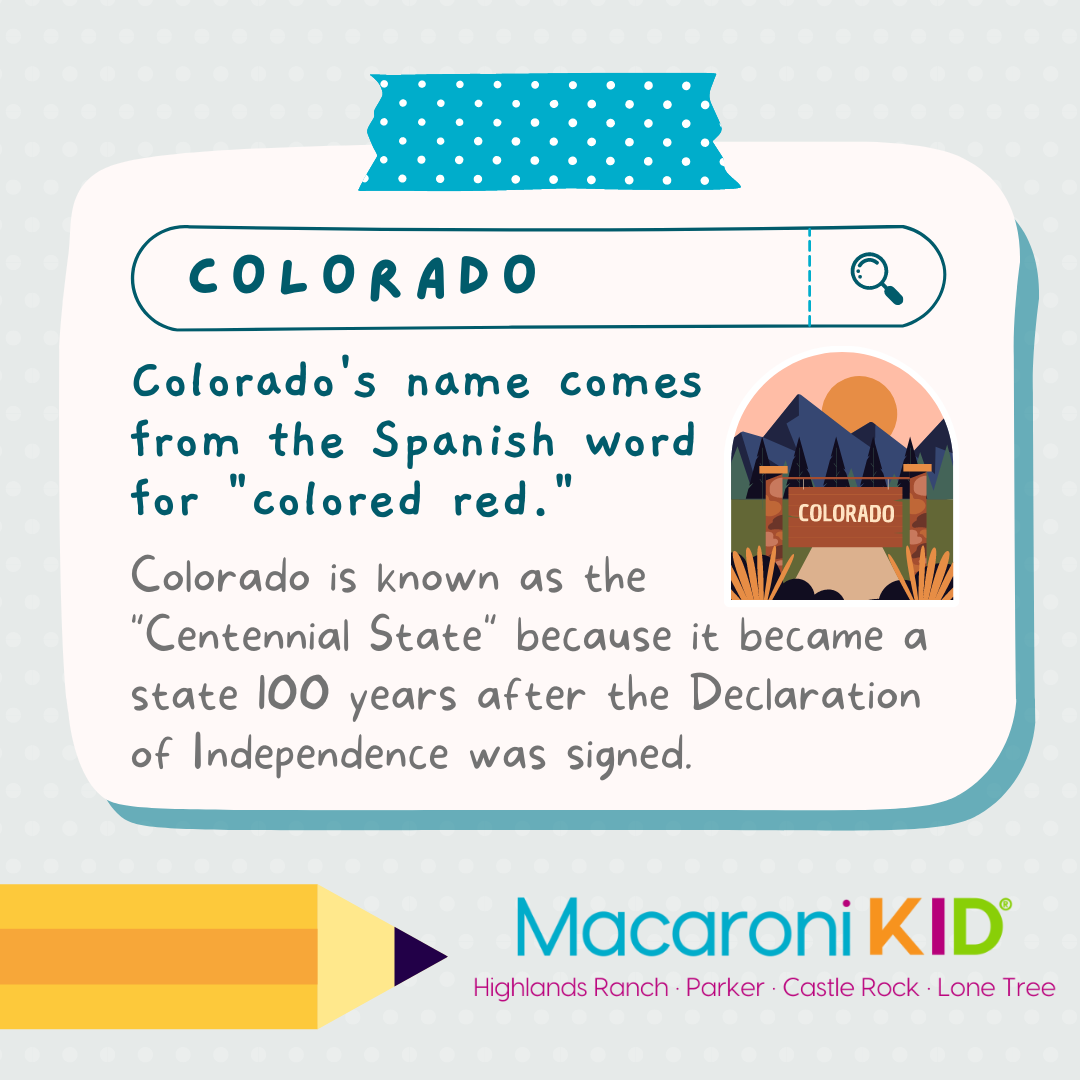 Colorado's name comes from Spanish origins and means "colored red." The state's beautiful red sandstone is just one of the reasons Colorado has the nickname "Colorful Colorado," but that's not its only nickname.

Colorado is also known as the "Centennial State." Centennial refers to the hundredth anniversary of a particular event, and Colorado became a state 100 years after the Declaration of Independence was signed. 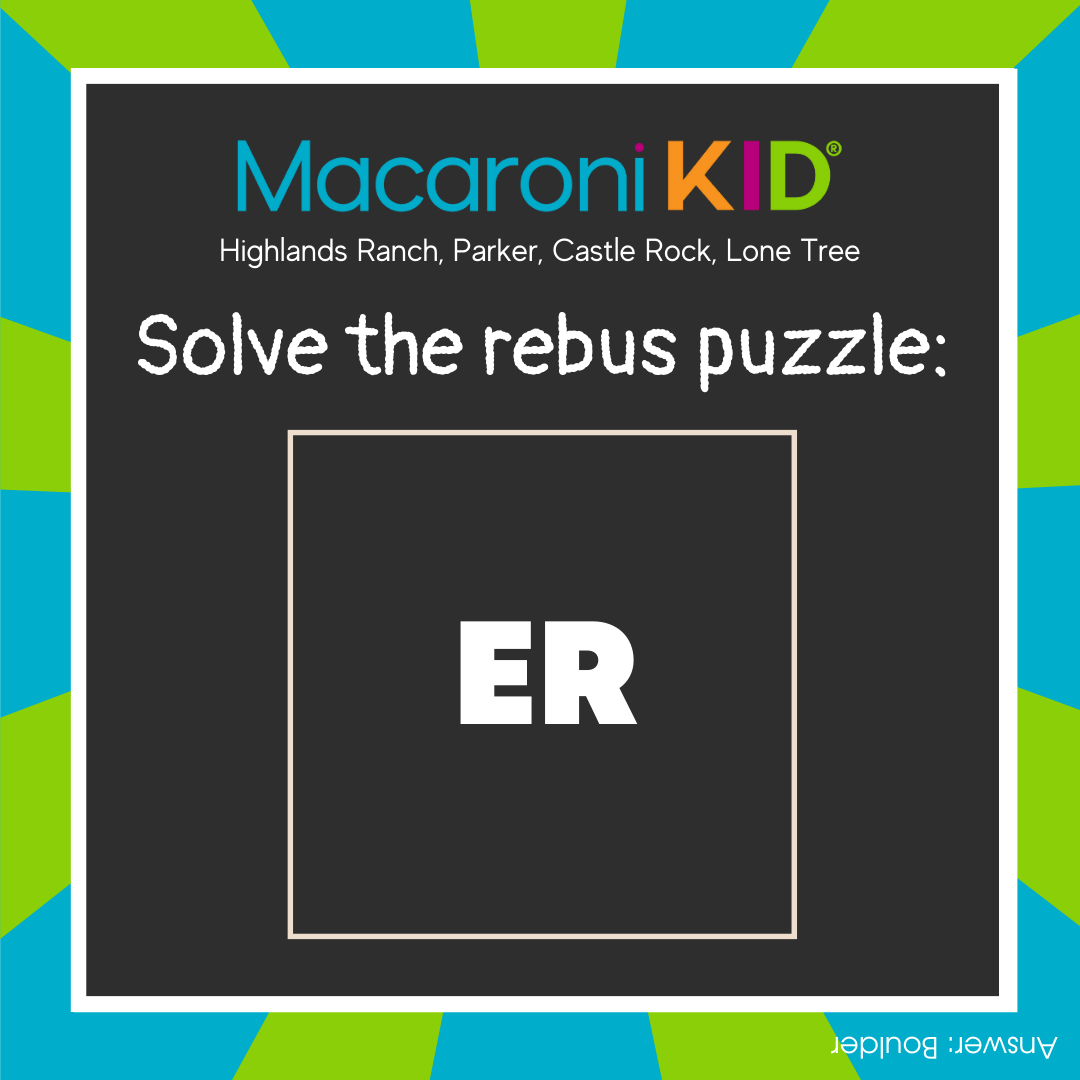 A boulder is a large rock measuring over 10 inches in diameter. Boulder is also the name of Colorado's 11th most-populated city, with more than 108,000 residents. Visit Boulder, Colorado, for outdoorsy family-friendly fun.

Have you ever thought about how convenient it would be if you could exist in more than one place at the same time? Well, visit this unique destination to be in FOUR places at once! 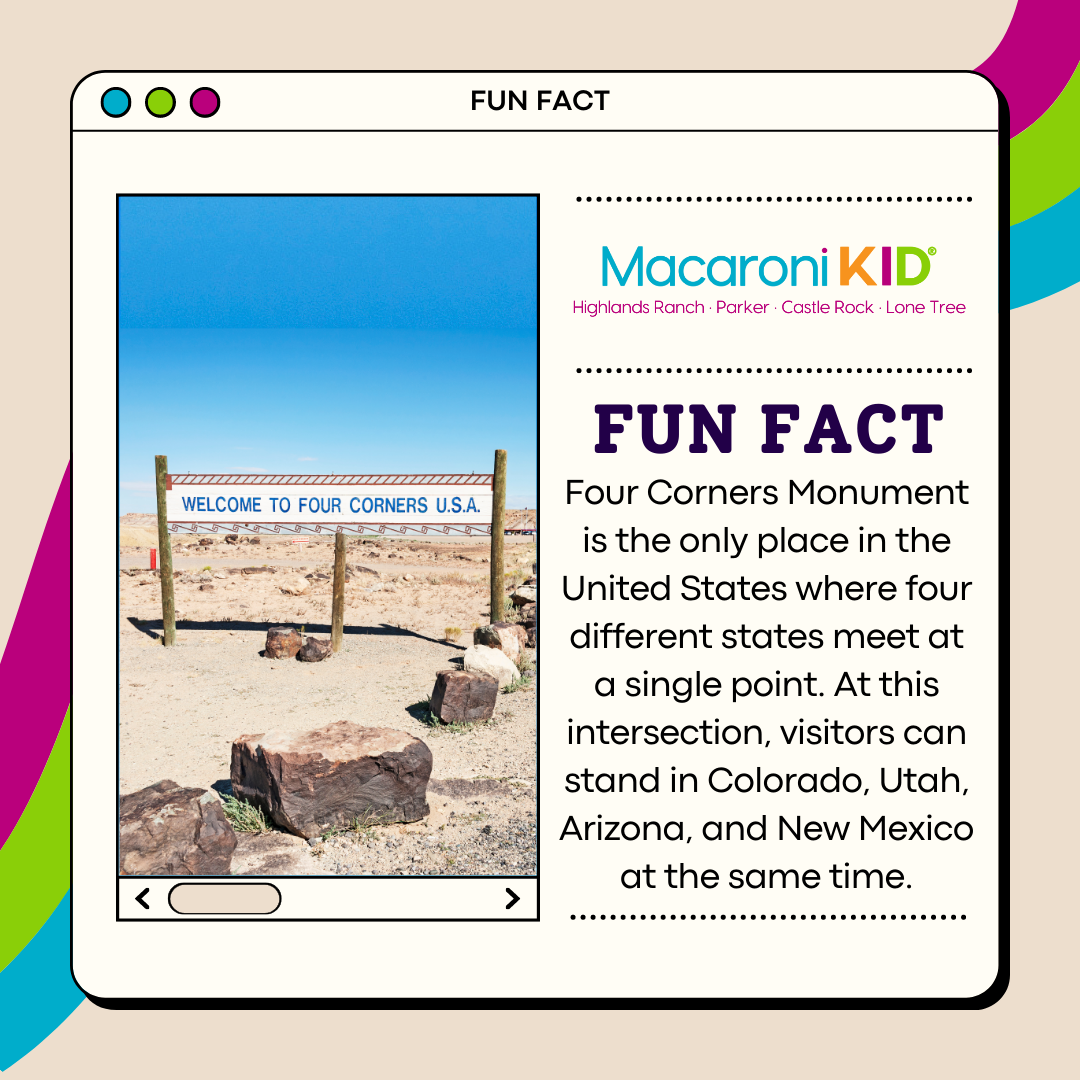 Four Corners Monument (overseen by Navajo Nation Parks & Recreation) is the only place in the United States where four different states meet at a single point. At this intersection, visitors can stand in Colorado, Utah, Arizona, and New Mexico at the same time.

Visit the Four Corners Monument for yourself with travel tips from Colorado Come To Life.

Denver has been dubbed the Mile High City because its elevation is 5,280 ft above sea level. There are two notable downtown locations to visit if you want to experience that one-mile milestone: Coors Field and the Colorado State Capitol Building.

The infamous mile-high elevation mark is visually apparent at Coors Field, where the 20th row of seats is painted purple. At the State Capitol Building, the 13th step on the west side of the building is noted for being at 5,280 ft above sea level. 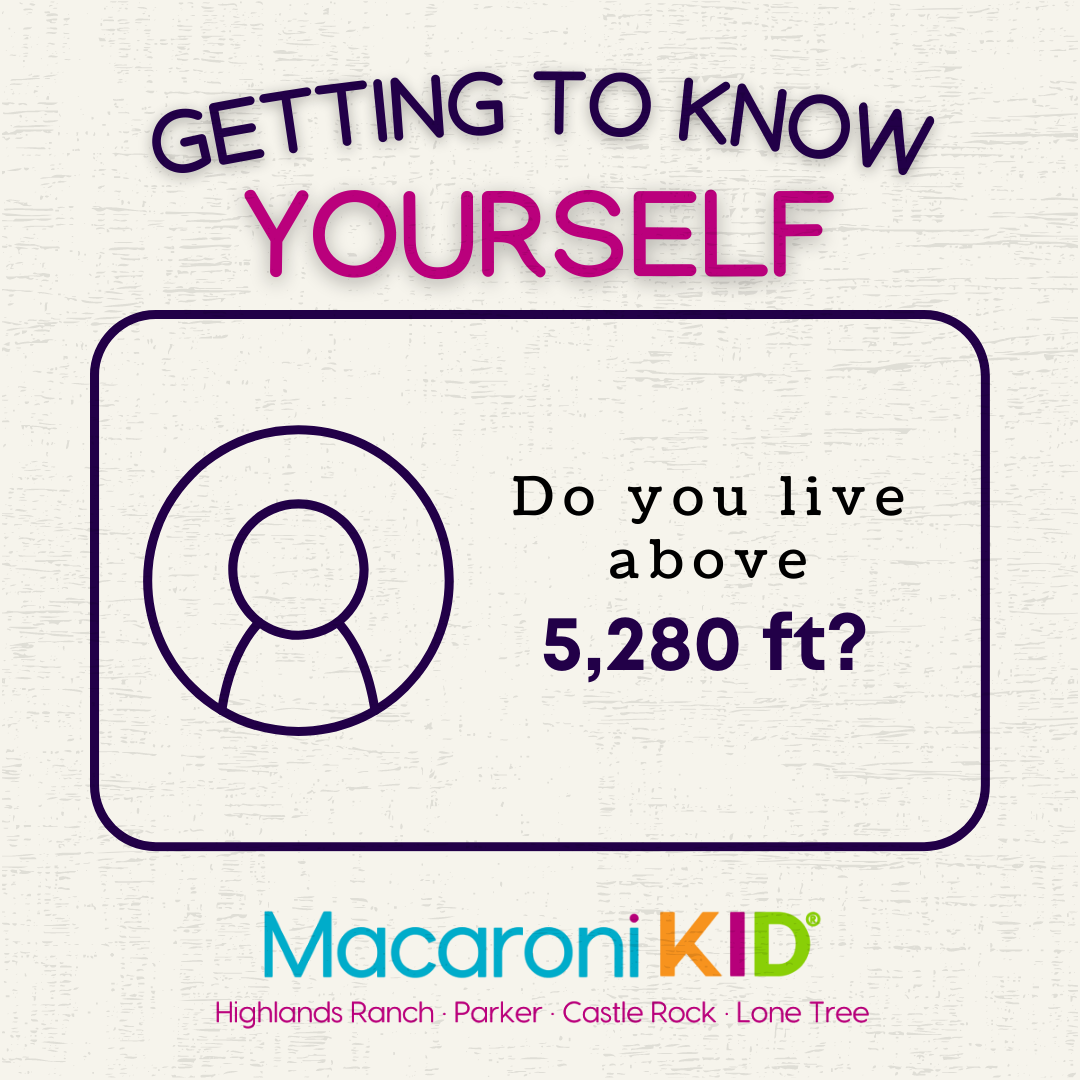 Do you live above Denver's infamous 1-mile altitude mark?

Bonus question: What's the difference in altitude between where you were born and where you live today? If you've relocated to Colorado from another state, there's a good chance this number is in the hundreds, if not thousands!

Although I lived in Manitou Springs (6,358 ft) during middle and high school, I spent some of my early youth in Hitchcock, Texas, which sits at a whopping 😉 16 feet above sea level.

"Nil Sine Numine." –Colorado's state motto. The Latin translation of this phrase is "Nothing without divine will."