Restaurant Chains You'll Only Find in Colorado — For Now!

You've probably heard of Chipotle, Qdoba, and Quiznos. These fast-casual restaurant chains are just some of the nationwide food giants that came from humble beginnings right here in Colorado.

Whether you're visiting the Centennial State for the first time or you're a local foodie who likes to try it all, we've rounded up some of Colorado's favorite restaurant chains you'll definitely want to experience for yourself.

Play along! Screenshot or print our BINGO card to keep track of the CO restaurants you visit. 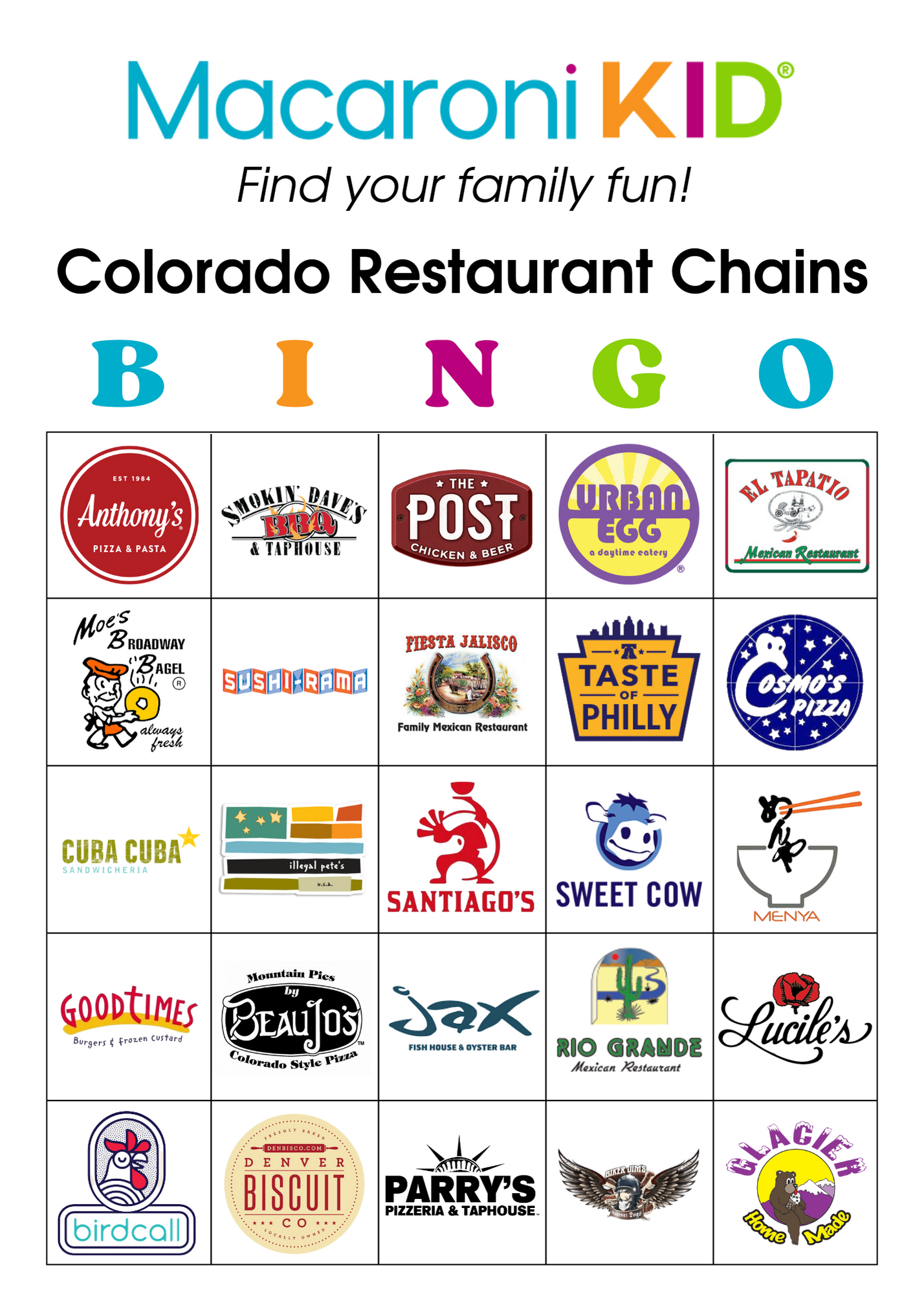 Restaurant chains that are ONLY in Colorado

Explore a world of flavor without even leaving the state. From breakfast to dessert, Mexican to Italian to Japanese, these delicious restaurant chains (with 5 or more locations) can ONLY be found in Colorado. The rest of the world will have to wait... for now.

Anthony's Pizza and Pasta
Since 1984, Anthony's has been serving up authentic New York style pizzas, classic Italian pasta dishes, hot hero sandwiches, and refreshing salads. Get your fill at one of 18 Colorado locations across the Front Range.

Beau Jo's
Sold by the pound, Beau Jo's pizza is unlike any you've ever tried before! Discover this one-of-a-kind meal along with various pasta dishes, sandwiches, calzones, salads, and more at six mountain town locations. Follow their food truck tracker to catch them at local events and area attractions too.

Biker Jim's Gourmet Dogs
Adventurous eaters can enjoy gourmet hot dogs with a variety of meat options including, but not limited to, ostrich, elk, wild boar, jack-a-lope, rabbit, and rattlesnake. Find these delicacies at two Denver storefronts, five food cart stands across the Front Range, or shipped directly to your home.

Cosmo's Pizza
Since 2001, Cosmo's has been dishing up delicious hand-tossed pizza. Foodies can now find them at seven storefront locations from Denver to Fort Collins.

Cuba Cuba Sandwicheria
Authentic Cuban cuisine is the name of the game at Cuba Cuba's 6 Colorado locations across the Denver metro area. Try tasty sandwiches (the Cubano is a must!), combination plates, wraps, and salads.

Glacier Ice Cream & Gelato
Since 2001, Glacier has made over 1,000 flavors of delicious ice creams, gelatos, sorbets, and low-fat yogurts. Now in five Colorado locations across the Front Range, get your fill of award-winning frozen treats.

Lucile's Creole Café
Bringing the best of New Orleans to 6 locations across the front range, Lucile's is a premier brunch location that got its start in Boulder, Colorado. You enjoy Louisiana favorites like Chicory coffee, beignets, shrimp and grits, spicy andouille, red beans, gumbo, po'boys, and so much more.

Moe's Broadway Bagel
Moe's Broadway Bagel, a family-owned business that made its start in Boulder, brings east coast flavors to the Rocky Mountains. Pick up hot and fresh bagels, breakfast burritos, specialty sandwiches, or party platters at one of seven Colorado locations.

Rio Grande Mexican Restaurant
Get your fill of tacos, burritos, fajitas, enchiladas, traditional desserts, and more at one of five Rio Grande's restaurant locations throughout the Denver metro area. Have dietary restrictions? Check out their vegan menu, gluten-free menu, and/or keto menu for your convenience.

Smokin' Dave's BBQ & Brew
Since 2007, Smokin' Dave's has been offering mouth-watering BBQ. In-restaurant offerings include burgers, sandwiches, smokin' platters, ribs, family meals, and lots more. Want to barbeque at home? Pick up a jar of their signature sauce which is available for purchase at each of their six Colorado locations.

Sushi-Rama
Prefer to see your food before you order? You're in luck at Sushi-Rama! Various sushi plates weave their way on a conveyor belt around the restaurant. Find something that looks tasty and be the first to snatch it up. Experience the "sushi-go-round" concept for yourself at one of five Denver area locations.

Sweet Cow
Savor the flavors of Sweet Cow's on-site hand-crafted ice cream at six Colorado locations in the Denver metro area. Take the flavors on the road when you invite the Moomobile (food truck) to your special event. It'll surely be "memoorable!"

Taste of Philly
Bringing the flavors of Philadelphia to the front range since 1993, Taste of Philly offers unforgettable cheesesteaks, hoagies, grinders, and specialty sandwiches at 15 Colorado locations.

The Post Chicken & Beer
Featured on Diners Drive-Ins & Dives, The Post has become famous for its crispy, juicy chicken and family-style comfort foods. Since opening in 2014, The Post has expanded to seven Colorado locations.

Urban Egg Daytime Eatery
Since 2002, Urban Egg has been serving breakfast favorites along the Front Range. Now with eight CO locations, Urban Egg barely makes the "Exclusive to Colorado" list as an additional location in Kansas City is due to open in Spring 2022.

Restaurant chains that are PRIMARILY in Colorado

Slightly less exclusive to Colorado, these restaurants have expanded beyond the CO border with 3 or fewer locations across the state line:

Denver Biscuit Company
With five Colorado locations (and one in Kansas City), Denver Biscuit Company has been whipping up creative biscuit entrees for more than a decade. For a savory meal, try any of the biscuit sandwiches. If you have a sweet tooth, enjoy their giant biscuit cinnamon roll.

Good Times Burgers & Frozen Custard
Since it first opened in Boulder, Colorado, Good Times has grown to 34 local locations plus two in northern Wyoming. Menu items include burgers and frozen custard (of course!) plus chicken sandwiches and breakfast burritos with hatch green chile.

Illegal Pete's
Illegal Pete's got its start in 1995 in Boulder, Colorado. Since then, the restaurant chain has expanded to ten local stores and two in southern Arizona. Foodies can enjoy mission-style burritos, bowls, salads, nachos, and quesadillas at ten Colorado locations. Be sure to try their signature queso!

Parry's Pizzeria & Taphouse
Parry's offers New York style pizza, calzones, and wings at 12 restaurants along the Front Range. Since its start in Parker, Colorado in 2007, Parry's has become a local favorite and has expanded to include three Texas locations as well.

Restaurant chains that are MOSTLY in Colorado

The next Chipotle? These Colorado-born restaurants have taken on the national stage with 4 or more locations outside the state.

Berry Blendz
Getting its start in northern Colorado, Berry Blendz offers smoothies, bowls, and fresh juices at 13 Colorado locations. You can also find their notoriously smooth blends at four sites in Minnesota and 1 in Ohio.

Garbanzo Mediterranean Fresh
Enjoy the taste of fresh Mediterranean cuisine at one of Garbanzo's eight Colorado locations. You'll also find delicious pitas, salads, wraps, and gyros at 18 locations across 11 other states primarily to the east of Colorado.

Mad Greens
In 2004, Mad Greens opened its doors in Centennial, Colorado. The fast-casual salads, bowls, and wraps concept has gained popularity as a healthy, delicious, and quick meal option. Foodies can now find Mad Greens at 15 Colorado locations as well as four in Arizona and four in Texas.

Snarf's Sandwiches
Since first opening in Boulder in 1996, Snarf's offers award-winning made-to-order sandwiches and salads using the freshest ingredients. Foodies can find Snarf's in 18 Colorado locations as well as a handful in Missouri and Texas.

Tokyo Joe's
From its conception in 1996 in Englewood, Colorado, Tokyo Joe's has grown to 36 local restaurants plus nine in Arizona and Texas. Diners can enjoy Japanese specialties such as poke, sushi, and build-your-own bowls.

Want to visit the original location for your nationwide favorites? Here are some that still serve up delicious eats today:

Chipotle
1644 E Evans Ave, Denver
With more than 2,700 locations, Chipotle has become a household name across the US, Canada, and Europe, serving up build-your-own burritos, tacos, bowls, and salads. Chipotle opened in Denver in 1993.

Smashburger
1120 S Colorado Blvd, Denver
Smashburger was founded in Denver in 2007 and has since grown to more than 300 nationwide stores. Guests can enjoy 100% Certified Angus Beef® burgers, chicken sandwiches, salads, and creative sides.

Qdoba
550 Grant St Ste B, Denver
Qdoba began operations as "Zuma Fresh Mexican Grill" in Denver in 1995. Since then, it continues to serve create-your-own bowls, burritos, and tacos at more than 700 locations nationwide.

Quiznos
1275 Grant Street, Denver
Quiznos started selling its delicious subs, sammies, and salads in Denver in 1981. Grab a quick, flavorful bite to eat at more than 200 stores across the country.